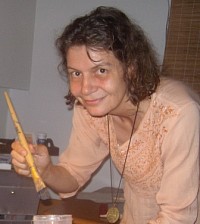 (for English please scroll down) 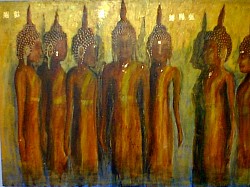 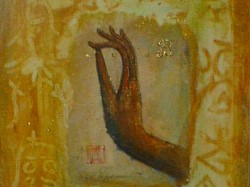 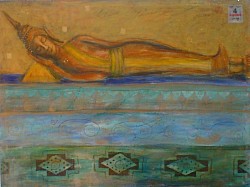 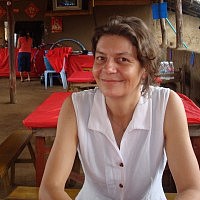 Unmistakable elements of Asian culture have been the inspiration for Lisa Lippuner, a Swiss artist who until recently lived in the North East of Thailand. After successfully completing her studies as a florist at the Zurich Art Academy, she embarked on extensive travels, spending much of her time in South East Asia. Fascinated by this region, she decided to settle here and established Mut Mee Guesthouse which is idyllically located on the banks of the Maekong River in Nong Khai. Over time, this Guest House has become a magnet for artists from all over the world. Some of the rooms today remain decorated with paintings from this early phase of Lisa Lippuner's work.

1992, the artist left Thailand to take up a position as a guest student at the Equator Academy of Art in Penang, Malaysia, where she acquired new techniques such as Chinese ink painting.

She then moved to Germany where she became an associate member of the artist group 'GbK' The most celebrated member of this group, the renowned painter Karl-Heinz Essig, was her mentor for many years.

Lisa Lippuner has made a name for herself in the German speaking art scene through numerous exhibitions. Her solo exhibitions, 'The Way of the Soul' (Zurich) and 'Eurasian Currents' (North Rhine Westphalia), were greatly applauded by the press; indeed the 'Westfaelische Zeitung' writes: "From Lisa Lippuner's paintings a new style became established, created from international experience".

Residing again in Thailand since 1998 she had spent most of her time working in her own studio next to the Mut-Mee Guesthouse. Her exhibition (February 2002)"Asking for Rain" in Vientiane, Laos, was well received. In the words of the 'Vientiane times': "for Lisa Lippuner, painting is a form of meditation. To relax your eyes and refresh your soul, a visit to the delightful exhibition 'Asking for Rain' is thoroughly recommended. The Asian influence in her work is striking not only in the subject matter, which is dominated by images of the Buddha, but also in the colour and techniques she chooses".

These techniques employ a mix of media. Acrylic and watercolours are combined harmoniously with a collage technique in which she makes use of Far Eastern materials, such as gold leafs, saa and rice paper. Foremost, her use of gold leaf and gold paint creates a unique shimmering, constantly changing aspect to her paintings.

At present the artist is living and working in Weinheim, Germany 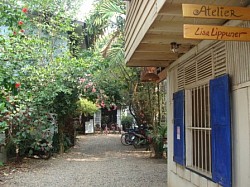 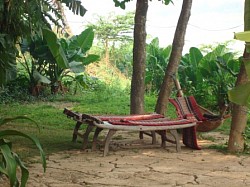 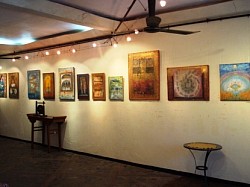